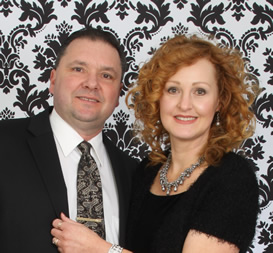 Chris is originally from Chicora. He is the son of Lucy (Hetrick) Dollar and her husband John of Butler, and the late William J. "Bill" Hile. Chris' brother, Bill, resides in East Brady. Chris is married to the former Terri Fleeger, daughter of Larry and JoAnn Fleeger, also of Chicora. Chris and Terri have two sons, Trevor and Aaron. Trevor is an Allegheny Clarion Valley High School and Grove City College graduate, who currently teaches 4th grade at A-C Valley Elementary School in Foxburg. He resides in Emlenton with his wife, Sarah, and two children, Gwen and Greyson. Aaron is an Allegheny Clarion Valley High School and Butler County Community College graduate, who currently works in the technology department at the A-C Valley School District in Foxburg. He resides in Kennerdell with his wife, Dani.

A graduate of Karns City High School and Butler County Community College, Chris graduated from the Pittsburgh Institute of Mortuary Science in 1982. A licensed funeral director for more than 30 years, Chris, with the help of his family, operates funeral homes in Chicora, Karns City, Emlenton, St. Petersburg, and Seneca. He and his wife Terri also own and operate Donegal Monument Company in Chicora and the Emlenton Granite Works.

Chris has been involved in volunteer fire and E.M.S. for many years and is currently the President of the Board of Directors of the Emlenton Area Ambulance Service. He is also a member of the Chicora Volunteer Fire Department, and the Emlenton Fire Department, where he has served as fire chief. The Hiles attend New Zion E.C. Church. Chris has been a lay speaker for many years at various churches in the area and has served as master of ceremonies at many public events. He has served the Counties of Clarion and Venango as a Deputy Coroner and is a member and past president of the A-CV Kiwanis.

His main concern and pledge as a funeral director is to treat each family he serves in the same manner in which he would want to be treated if a death had occurred in his own family.